Without much foreword, we’re highlighting some interesting situations.  Notice that identifying support and resistance (horizontal or diagonal trendline), are key to basic technical analysis (TA).

You can find these situations on  your own by building a custom screener.

Theta Fuel (TFUEL) is showing very promising signs of an uptrend renewal.  It bounced off its strong support zone @ $0.008, then broke through resistance @ $0.010, which turned into support now.  We’re seeing an uptick in momentum with bullish crossovers in RSI (>50), MACD, and CCI (>-100).  Also, price has formed a couple of Higher Highs and Higher Lows, which is textbook uptrend.  It’s early, but the odds are in the Bulls favor.  Stop Loss (or Alert) should be set at $0.010. 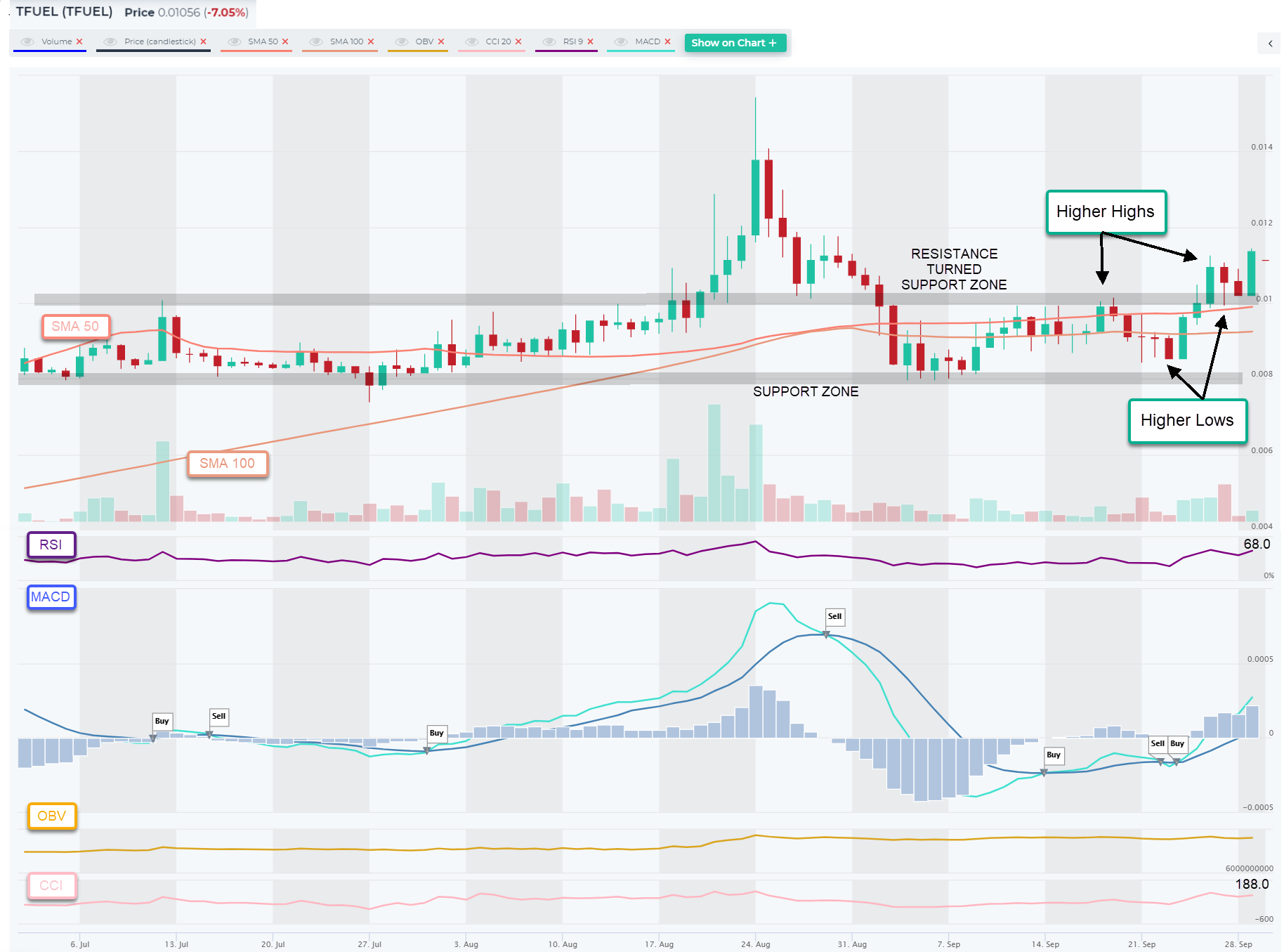 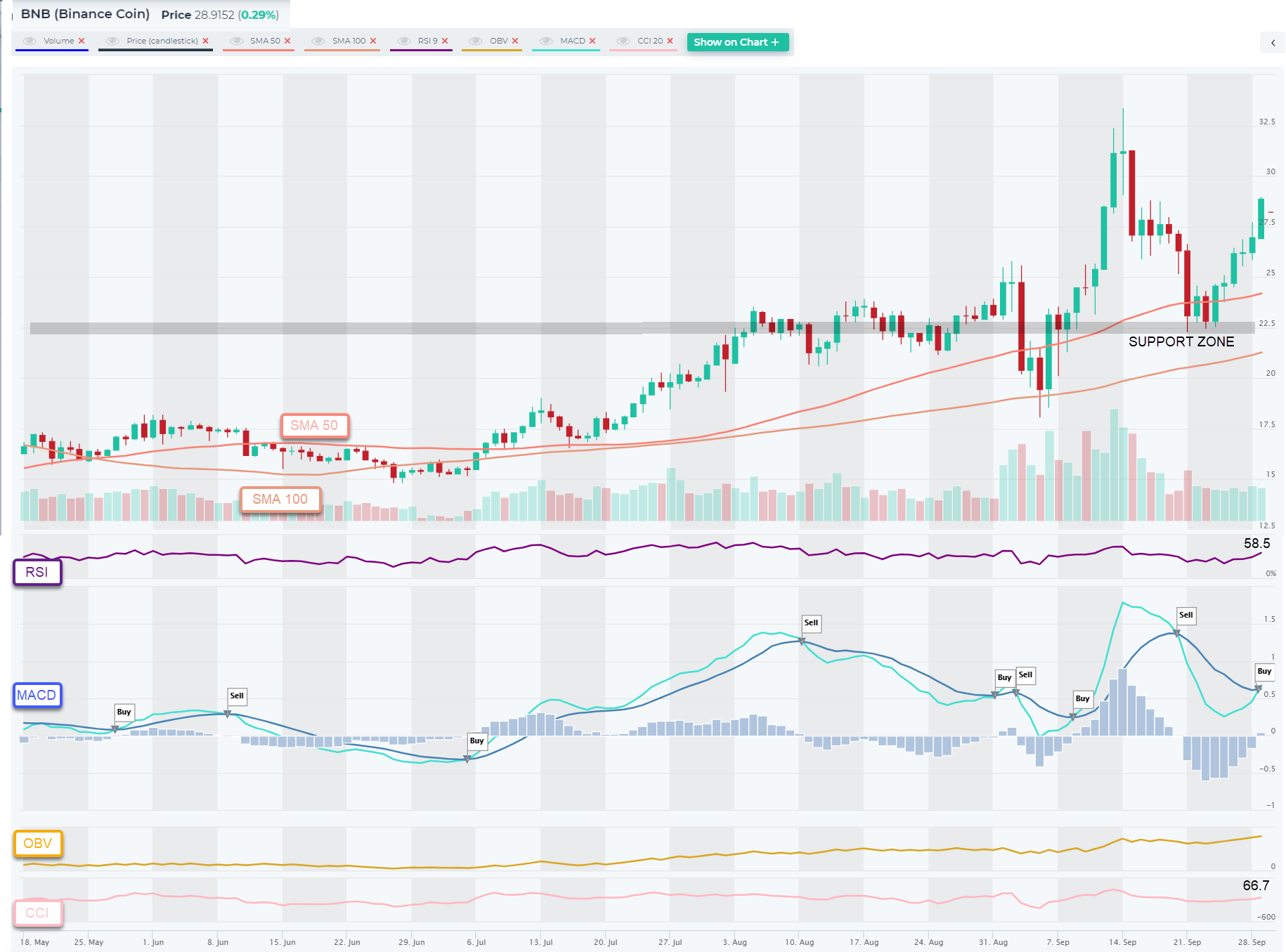 NEM (XEM) has also recently received bullish signals in RSI, MACD, CCI, although OBV isn’t convincing yet and overall volume has thinned out during this bounce.  So the jury is still out on whether this is a start of a sustainable uptrend, but there are some green shoots. 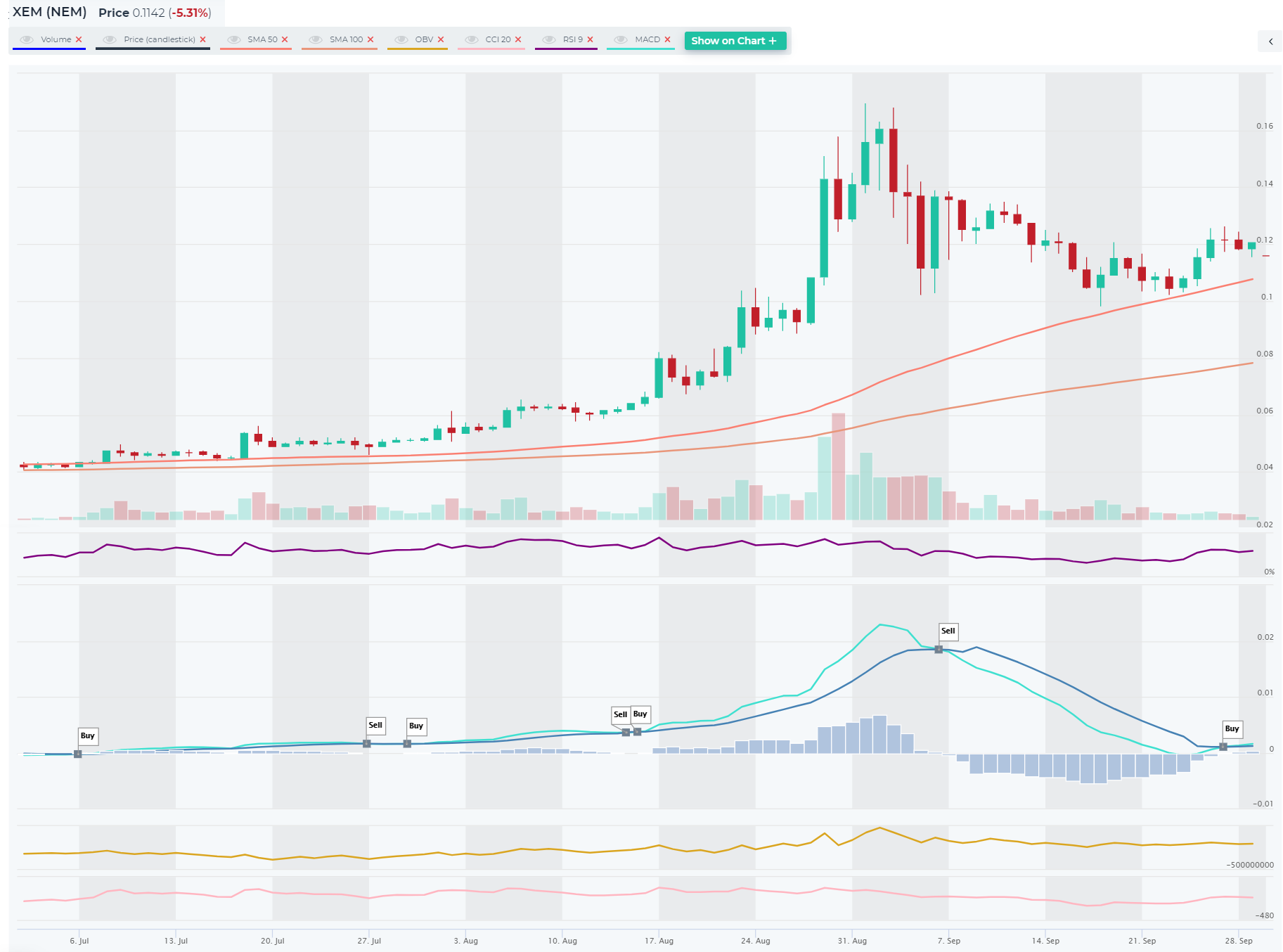 We recently discussed trading channels.  Swing traders can go to town with it, Buying at Support and Selling at Resistance.  Let the oscillator indicators (RSI, CCI, STOCH…) be your guide as well.  Ideally the price is close to the support AND oversold, and conversely, close to resistance AND overbought.  Coins trading in a channel: QASH, ADX, DOCK. 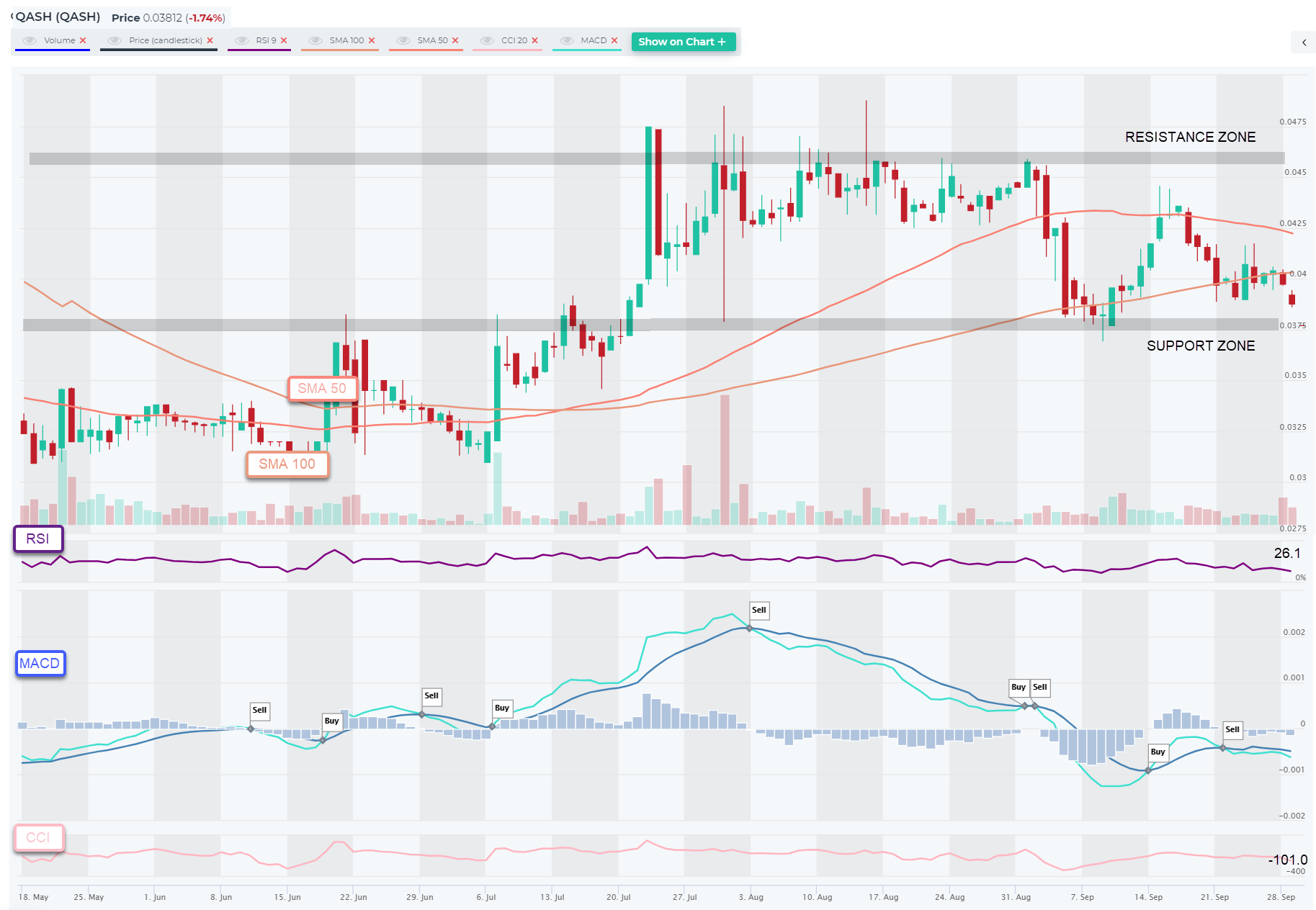 LET appears trading in a Channel Up, and is nearing its support @ $0.0125 .  It is likely to bounce up higher again after reaching lower trendline (now).  It also shows a couple of higher highs and higher lows, early indications of an uptrend.

Descending triangles.  As we discussed in recent post, Descending Triangles are typically bearish and resolve in a breakout through the support line.  A swing trader can trade between the trendlines (Buy at Support, Sell at Resistance).  Or a trader can wait for a breakout, either Up or Down, ideally with a big decisive move and big volume, to avoid false breakouts.  There are times when price breaks out to the upside, forming a Bullish Reversal as it appears in ADA and ATOM. 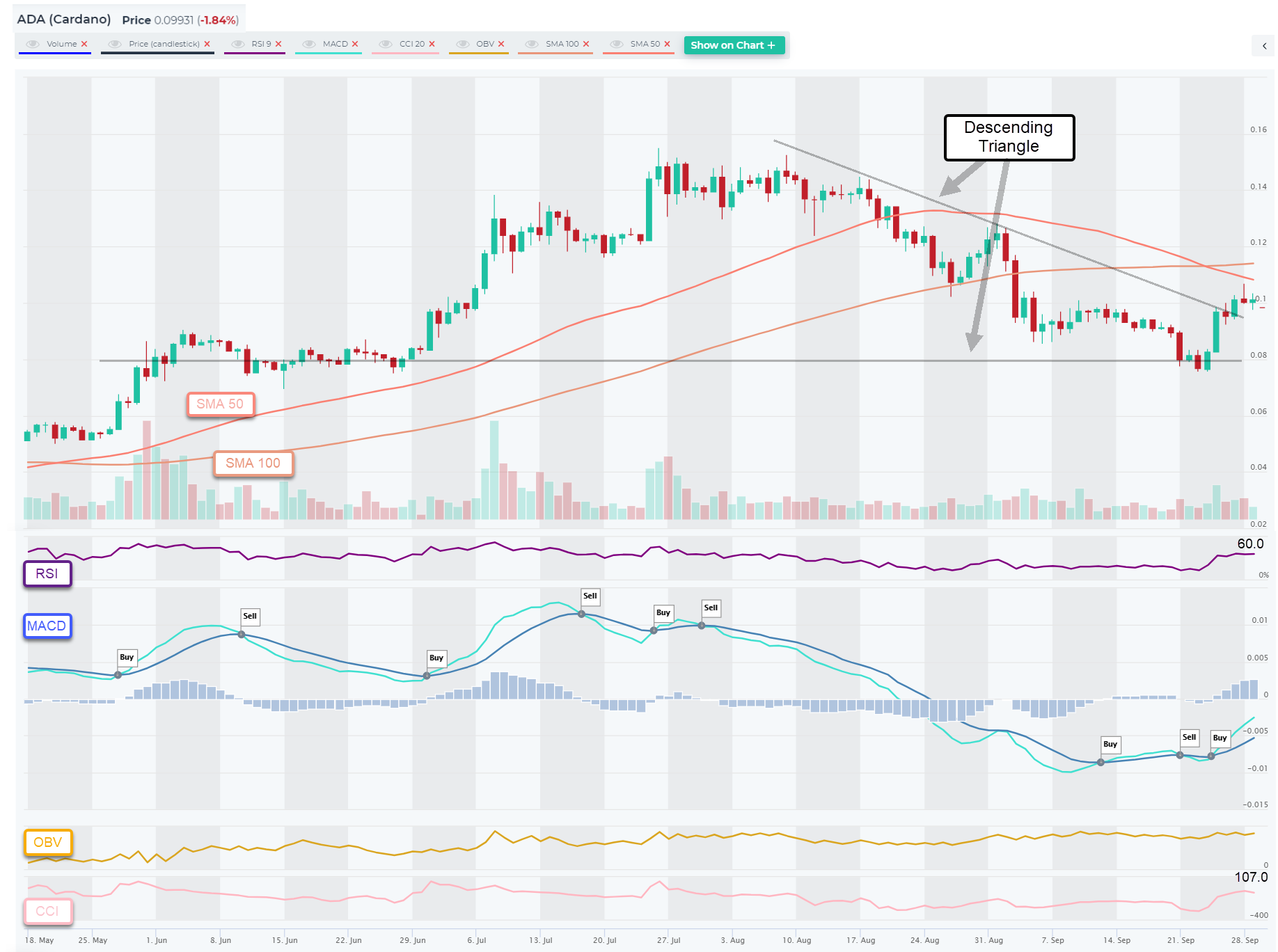